The Unexpected, Creative Benefits of Sharing Your Studio

How to Treat Depression

The Unexpected, Creative Benefits of Sharing Your Studio 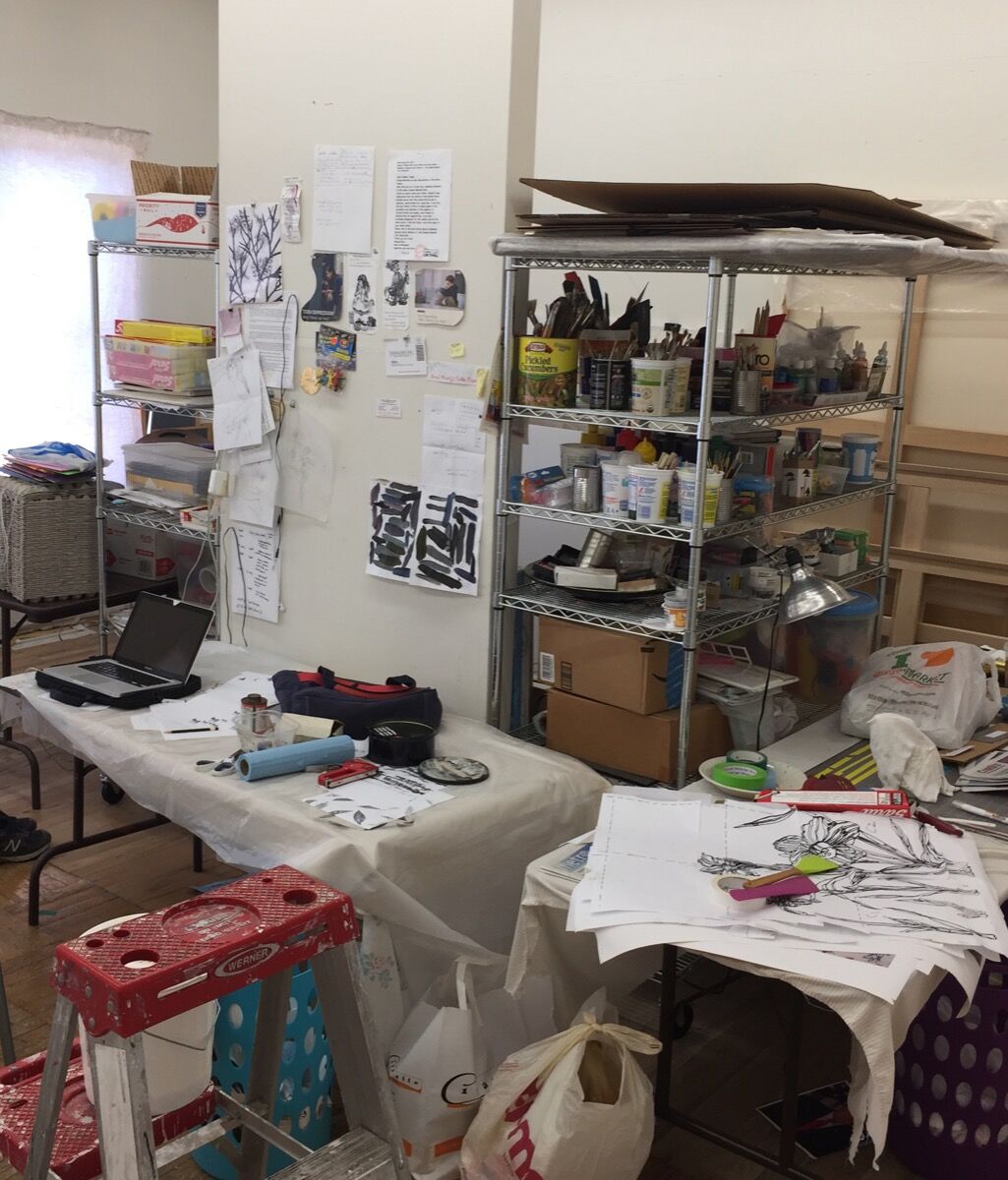 With the rise of trendy co-working spaces like The Wing and WeWork in recent years, the benefits of such environments have come to the fore. While these companies promise opportunities for networking, career advancement, and off-the-charts idea exchange (not to mention stylish digs), compelling research has found that the people frequenting co-working spaces—like freelancers, entrepreneurs, and remote employees—experience enhanced creativity.

But can the same creative benefits be felt when artists share a studio? You might think the answer is yes, but it’s not always the case. Shared studios can help enhance creativity, but only if the artists are frequently interacting, swapping resources, and exchanging feedback.

Dr. Thalia R. Goldstein, assistant professor of applied developmental psychology at George Mason University, has noted that under the right circumstances, the benefits of coworking spaces can also be felt by artists sharing a studio, by virtue of the fact that it fosters collaboration, as well as the “freedom and time to engage with others,” she said.

Multiple research findings back up this notion. At the University of Michigan’s Stephen M. Ross School of Business, the first phase of an ongoing study on co-working spaces (chaired by Dr. Gretchen Speitzer, Dr. Peter Bacevice, and Lyndon Garrett) found that the freedom to think and create independently, with self-defined opportunities to join in community, led to a heightened sense of achievement. (The study surveyed descriptions of several hundred co-working spaces in the U.S. and Europe and interviewed their members.)

To test out how this theory applies to art studios, we spoke to four different pairs of artists who have shared workspaces for various reasons in recent years. Though distinct in their careers, these artists found that their working arrangements made a profoundly positive impact on their respective practices.

As Farkhondeh explained over the phone, “The triggering elements for our collaboration came after I experienced depression, and maybe without my depression it wouldn’t have happened at all.” While at CalArts in 2000, he was so haunted by inner demons that he moved to New York to share a studio with Amer. “At the time, I suspected everything was coming from my paintbrush. I thought if I painted on Ghada’s canvases, maybe I wouldn’t have that problem anymore,” he recalled. Although he soon pushed past the fear, the collaborative process led to a playful, uninhibited energy that both artists wanted to further cultivate. They’ve shared an open-plan studio in Harlem ever since, with each artist working on one side of the room and collaborations happening in a diplomatic buffer zone that runs between them.

The arrangement is not without tension, however. Amer, who is neat and orderly when she embroiders, admitted that “when I paint, I drip,” nodding to the mess that can accumulate on the walls and floor. “Reza, on the other hand, is very controlled,” she added, noting that they’ve recently grown out of their space and are in the process of renovating a new building. This airy four-story studio will offer separate levels for Farkhondeh, Amer, and their assistants, plus an open stairwell snaking up the center, ensuring that neither artist is isolated.

Sharing a studio has also proven constructive for sculptor and designer . In their case, however, they choose to close the doors that divide their respective spaces in an industrial building in East London.

Fittingly, Upritchard first met Gamper after she asked to visit his studio. “I was very interested in his work and thought he could give me great advice on pedestals for my work,” she explained via email. He offered generous insight into the design world and access to his library, and later became her husband and studio mate. Gamper, too, has been influenced by his partner’s practice. “When I met Martino, all his work was various shades of brown,” Upritchard recalled. “He has wholeheartedly embraced color, and I guess that came from me.”

Upritchard keeps long solo hours behind a heavy soundproof door, which offers the silence she needs to work (like for her current solo show “Pots” at Anton Kern Gallery in New York, on view through June 30th, and Wetwang Slack, a major commissioned installation opening September 27th at The Curve at Barbican Centre in London). However, she, Gamper, and his staff take turns cooking hot lunches and come together every afternoon in their communal studio kitchen at a long table. They view the daily meal as an outlet for bouncing ideas off of one another, and welcome neighboring creatives to join in.

Beyond gastronomy, Upritchard observed that sharing a space also helps to save money on materials, and offers many extra sets of hands to help with heavy lifting and execution. “I don’t have to double up on tools,” she explained. “Martino has a saw bench, welding setup, [and] tons of screws and fittings, which I pilfer from freely—along with the wood scrap piles.” 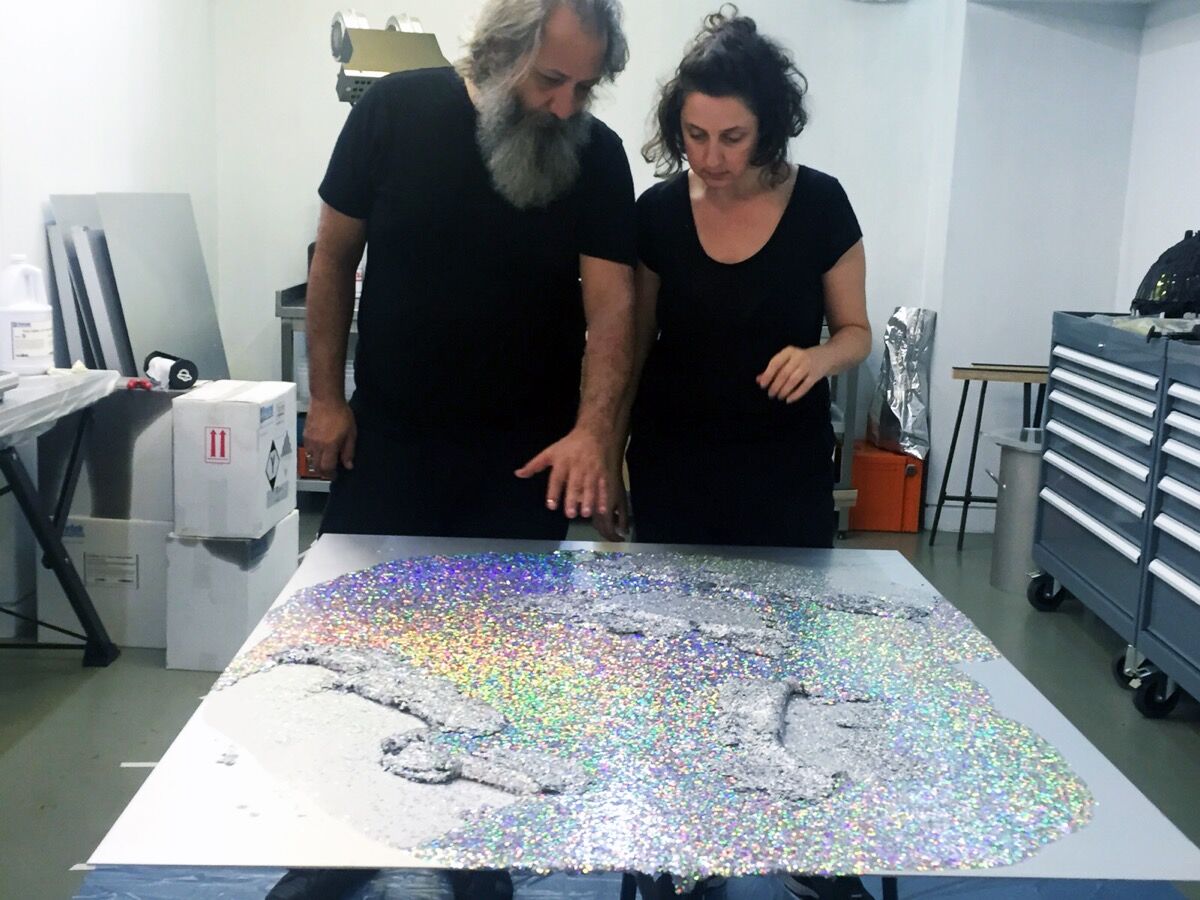 Birol Demir and Yasemin Baydar working in their shared studio, :mentalKLINIK. Courtesy of the artists.

Another couple, Yasemin Baydar and Birol Demir, have chosen to not only share a studio space, but also authorship of every work they generate. Referring to themselves collectively as , their platform scientifically dissects ideas, mediums, and processes, then reconstructs them in unpredictable, subtly violent ways. (The pair were seated on a bench, dressed nearly identically, as we spoke over video chat; they were in Belgium preparing for the September 6th opening of “OBNOXIOUSLY HAPPY” at La Patinoire Royale in Brussels, curated by Jérôme Sans.)

Their studio, which they refer to as a “creative factory,” occupies the ground level of a storefront in a hip shopping district of Istanbul; with the :mentalKLINIK sign on the window, they occasionally have humorous run-ins with neighbors in search of a psychologist. Once a year they host an open exhibition for the community, often in conjunction with local poets and artists.

Their understanding of a studio, however, transcends GPS coordinates. “It can mean our beds, our bodies, our minds,” said Baydar. “We might work in a studio, but [we] aren’t necessarily studio artists. We have a mental studio that can be anywhere.” It’s this pervasive belief—that the studio is virtual and that chances to conceive, fail, and execute work transcends physical bounds—which is at the core of how the duo works. When I remarked on how romantic this sounds, Demir joked darkly: “No. It’s not that romantic! It’s destructive to our relationship,” he said. “We are always discussing the art. The personal, the ego, it’s all mixed together in our lives.”

This lively dialogue, however, is among the greatest benefits that many artists find through sharing a studio. Indeed, the biggest thing that longtime friends and took away from their studio share was blunt yet non-competitive feedback from one another. (Though the two no longer split a space, they’re still so in step that Kahn agreed for Stout speak to us on his behalf while he was on an unnamed tropical island, “building a sculpture situation for people to scuba dive through from large works in concrete and mosaic.”)

Stout—who is currently working on a jewelry label, tentatively titled Stout Girl, in collaboration with designer Simone Paasche—likens the studio she shared with Kahn a few years back to a teenager’s messy bedroom. They shared the Brooklyn space to save money, and it quickly became a magpie’s den of potentially useful (or totally useless) junk and half-finished projects.

While working there, they pulled different shifts, allowing for the mental legroom each needed to experiment and use the full space without irritating one another. “At that point, I was working by myself,” Stout remembered. “I didn’t have an assistant. Misha would keep a regular schedule, but I would come in at three in the afternoon and we had a few hours to talk about what we were working on before he’d go home.” Then, she’d trawl his found objects, materials, and even steal his snacks while working into the night.

The two parted only because they were making so much stuff that they literally couldn’t move around anymore. Stout misses their interplay. “We encouraged each other to pursue ideas that maybe we would have talked ourselves out of otherwise,” she explained. “We would constantly ask one another verbatim, ‘Am I losing it?’ Then the other would respond, ‘No. You’re not losing it enough.’”